Spent part of yesterday watching the Gay Pride parade in Los Angeles and was struck by how apolitical it seemed.  In 2004, it seemed a good quarter of the participants sported HRC’s sticker, “George W. Bush, You’re Fired.”  This year the  “LGBT Obama” stickers were few and far between.

I only saw a handful of signs praising Obama for his “evolution” on gay marriage.  And there weren’t all that many people marching with the Stonewall Democrats: 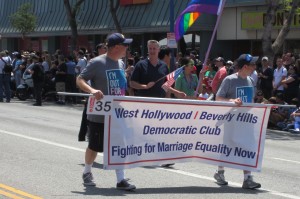 Now, to be sure, this wasn’t the entirety of the Democratic contingent. As I recall, there were 15-20 others marching ahead of these folks.  But, 20-25 gay Democrats in LA’s Pride parade doesn’t seem like a very substantial number.  And those marching didn’t seem particularly fired up.

Perhaps, it’s just California, but if Christopher Street West is any indication, gay Democrats aren’t all that enthusiastic about their party’s presidential candidate this year.