My pal, the blogress diva extraordinaire Joy McCann yesterday posted this image, quipping “Sometimes the little man makes sense.”   So much sense does he make below that I felt it incumbent upon myself to download the image and repost it here: 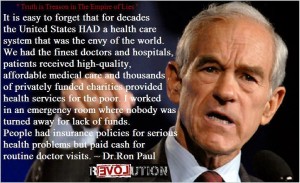 Reflect upon Dr. Paul’s words as you consider the impetus behind the Democrats’ program to overhaul our nation’s health care system through greater regulation and higher taxation.

Now, the system of course was never perfect.  No human institution ever is, but, in trying to fix the small problems of that imperfect, improving and basically good system, our supposedly well-meaning legislators made the whole system worse.

Its problems (prior to the enactment of the Democrats’ overhaul) are not so much attributable to free markets as they are to the layers upon layers of government regulation implemented over the years.