Last Thursday in the wake of the Supreme Court’s Obamacare ruling, CNN’s court conservative critic David Frum reassured his audience that repeal of the unpopular law “is a fantasy.” Frum himself fantasizes about Republican legislators’ “town halls filled with outraged senior citizens whose benefits are threatened”.

In the New Yorker, Ryan Lizza attempts to explain why Mitt Romney won’t repeal Obamacare, not believing the Republican “believe he will actually be able to overturn the law.”  Guess both men want to reassure their followers that once Congress enacts a policy expanding government, that expansion is here to stay.

They neglect one important fact:  never before in U.S. history has the U.S. House voted to repeal such significant legislation within a year of its passage.  The law remains unpopular.

Not just that.  Given the surge in Republican fundraising since the Supreme Court handed down its decision, Republicans know how much this issue motivates their base.  Mitt Romney must understand that he can’t afford to offend his base early in his term.

Indeed, the campaign demonstrated as much with the release earlier today of this graphic: 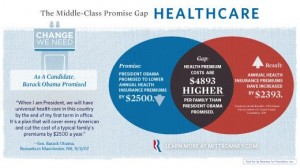 Now, Mr. Lizza may claim that the Republicans will need 60 votes to overcome a Democratic filibuster in the Senate. But, some have argued with the Supreme Court declaring the law a tax, it can be repealed with a simple Senate majority “under the Budget Act’s reconciliation process.”

And even if that didn’t work, the 113th Senate will not only be far more Republican than the current one (should Romney win), but Democrats up in 2014, particularly from such states as Alaska (Mark Begich), Arkansas (Mark Pryor), Louisiana (Mary Landrieu), New Hampshire (Jeanne Shaheen), North Carolina (Kay Hagan), South Dakota (Tim Johnson), Virginia (Mark Warner)**, knowing how the issue could work against them, are unlikely to filibuster the repeal of an unpopular bill, the support of which will have cost most of their colleagues their seats.

*If he wins, he won’t have a choice but to repeal the unpopular tax and regulatory scheme.

**I don’t include West Virginia’s Jay Rockefeller because he seems markedly indifferent to the concerns of his constituents.

FROM THE COMMENTS:  Ryan offers another reason why Romney will act to repeal the unpopular legislation:

I also think that Romney recognizes our country’s fiscal situation is completely unsustainable with Obamacare (or without it for that matter). He has to repeal it if he is to have any hope of keeping the economy from going off the cliff.