Caught this image on a formerly* left-leaning lesbian’s Facebook page: 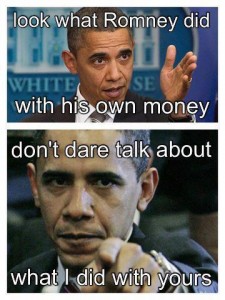 It called to mind a question she had asked previously, wondering just how many “green” energy companies receiving federal stimulus dollars had gone belly up. Not long thereafter she linked this blog post which alerts us to the 22 “clean energy companies supported by President Obama’s stimulus that are now failing or have filed for bankruptcy.”

Don’t you think what the president has done with federal taxpayer dollars is at least as newsworthy as what Mitt Romney did with his own?