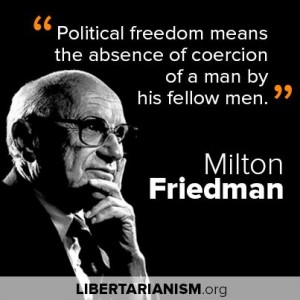 Glenn Reynolds quotes my fellow University of Virginia School of Law Federalist Don Boudreaux who in his centennial appreciation of the Nobel-prize winning economists offered this contrast between Mr. Friedman’s ideas and those of the incumbent President of the United States:

Note that Friedman would heartily agree with President Obama that no one prospers in today’s economy exclusively through his or her own individual efforts. Where Friedman would disagree – and disagree strongly – is with Obama’s suggestion that the main source of help that each of us gets from others is government. While government might supply some necessary pieces, such as highways and law courts, the vast bulk of what society supplies for each person’s sustenance and success comes not from government but from the ongoing private efforts of millions of individuals acting in free markets.