Having a number of errands to run today, I was able to adjust my route to pass by the Hollywood Chick-fil-A to snap a few pictures at about 3 PM local time.  I spoke with Alex, the local manager; she reported a brisker than usual business today:

FROM THE COMMENTS:  Brian doesn’t “think these crowds care much about gay marriage one way or the other. They’re opposing left-wing thug tactics and supporting the 1st Amendment & liberty.”   Seems the way it was this afternoon in Hollywood.

Now, there were some protestors, a total of 5 — and this at the corner of Sunset and Highland deep in the heart of blue America: 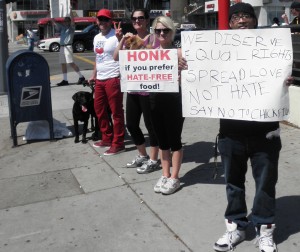 And one of their number couldn’t resist using the favorite word of the politically correct gay activist:

He gave me his permission to snap the picture. And there was security there: 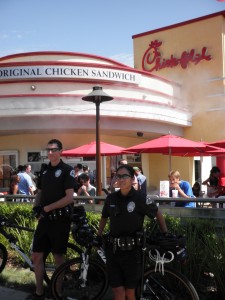 That said, the business remained brisk:

As for wading through the crowd at the Chick-fil-A on Whitesburg Drive supporting the company’s opposition to gay marriage, Dodson says, “That’s what freedom is.”