I have the pleasure to be attending the 4th Annual RedState Gathering in Jacksonville, FL.

Our first speaker this morning was soon-to-be US Senator from Texas, Ted Cruz. Wow, what an inspiring person. He is so passionate about this country, it made me realize how refreshing a message that is. It seems we have been in a national funk for quite some time. As I said on Twitter recently – “Mr. President, we are tired of being exhausted. Sincerely, America.”

But Ted Cruz is optimistic — more than me, I must admit. He is definitely going to be an important addition to the United States Senate in 2013 and a great partner with his ideological and Cuban-American counterpart, Sen. Marco Rubio. 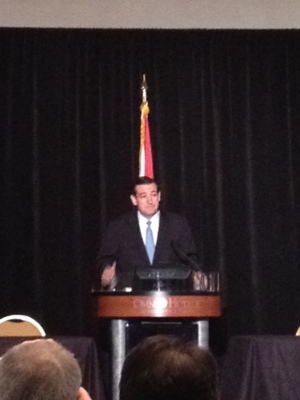 I’m absorbing more than taking notes, so as always if you want a snapshot of my brain this weekend at RedState, follow me on Twitter!

Later today, we will see a preview of the new Citizens United film, “Occupy Unleashed.”

I also hear rumors that a certain video featuring chickens & lasers will be shown to the group. Heh.