I’ve been working on a post contesting that “conventional wisdom” (as presented in at least two Washington, D.C.-based publication by quoting anonymous Republican strategists) that Mitt Romney’s choice of Paul Ryan as his running mate all but dooms the GOP ticket to certain defeat this fall.

My basic argument is that this notion is bogus, primarily because most Americans recognize that we need do something about the debt — and thus will not immediately reject his budget plan.  Not just that, the House Budget Committee Chairman can express himself (and defend his plan) quite well — even without a teleprompter.  As Seth Mandel put it on Commentary’s blog:

Joining the ticket means Ryan will be at full volume, speaking directly to the voters. A poll last week found popular support for Ryan’s budget after it was described in positive terms. If Ryan has the chance to frame the debate about his budget, Democrats may find the Obama campaign’s demagoguery less effective than they think.

Moreover,  you can’t really analyze this particular vice presidential nominee with traditional metrics.  His real test will come when he speaks later this month to the Republican convention in Tampa.

That said, early signs (while not conclusive) suggests Ryan helps more than he hurts, with the GOP base energized and donating money at a breakneck pace to the Romney campaign, the Wisconsin Congressman’s favorability rising and Gallup showing Romney polling better in a matchup against Obama (than he was last week).  From Gallup’s home page: 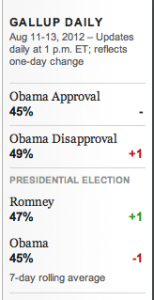 Now this could just be statistical noise, but so far there’s no evidence that Ryan is hurting the Republican ticket.