Caught this on Tuesday and just had to share it: 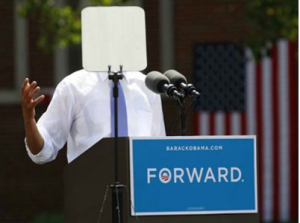 Via Instapundit who links Ed Driscoll’s commentary.  Ed, in turn, cites Ace who has dubbed it, “The Photo of the Year“, adding the “perfect” caption to it:

“I am new enough on the national political scene that I serve as a blank screen on which people of vastly different political stripes project their own views.”