UPDATE:  Seems Ace was on this well before I was.

FROM THE COMMENTS:  Mary nicely, succinctly sums up the new conventional wisdom:  “In my household, we say Obama likes the job — he’s just not much interested in the work.”   Mary, I don’t think yours is the only household where they’re saying that now.   🙂

I believe if it was Jonah Goldberg (UPDATE:  or was it Clarice Feldman?**) who first caused me to question whether Barack Obama even liked the job of President of the United States.  Sure, the Democrat liked the title and the perks, but he didn’t relish the responsibilities that came with those privileges.

In the past few months, particularly with the release of Bob Woodward’s book, The Price of Politics, numerous conservative pundits and bloggers have been asking a similar question.  Two weeks ago, Michael Barone observed that Obama “is a president who is much more comfortable campaigning than governing.”

Yesterday, it became apparent to me that it wasn’t just conservatives asking that question.  In the New York Times Caucus blog, Matt Bai wrote:

Watching the president grimace his way through the restrained back-and-forth reminded me of a conversation I recently had with a friend in Democratic politics, who posited that Mr. Obama simply doesn’t love being president. Not that he doesn’t want the job or believe he should have it, or that its challenges don’t give him plenty of cause for stress or solemnity — just that he doesn’t appear to actually enjoy the daily business of running the country.

(Read the whole thing.*)  Shortly after reading Bai’s thoughtful piece, I (via Ed Driscoll at Instapundit) discovered a similar reflection in the Washington Post where Melinda Henneberger asked, “Does Barack Obama really want to be president?”

Two pieces, both questioning a Democrat’s love for the top political job in the country in two left-of-center newspapers. Something is going on here.

In yet another Insta-post, in a similar vein, Driscoll referencing this New Yorker cover depicted below, linked (among other things)  Rick Wilson’s post where he referenced to “the dozens of snarky articles, brutal editorial cartoons, late night comedy shows taking new and unaccustomed shots at Obama“. 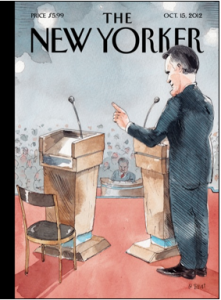 Ed offers some insight of his own in his piece on his own page.

Yes, something is definitely going on here, something that we’re not accustomed to seeing in the mainstream media, particularly this close to a presidential election.  Not quite sure what to make of it yet.  But, maybe Peggy was onto something when she wrote this week, “The impact of the first debate is going to be bigger than we know.”

*I say this even though I don’t agree with his every point; just believe he offers some insightful observations.

RELATED: Liberals fret: Is Obama bored? Does he want a second term? Maybe not.