On Friday, many conservative bloggers whether the Bureau of Labor Statistics (BLS) were playing games with the unemployment number.   I do understand their cause for concern, nicely summarized by Rob at Joshuapundit who reported that before Friday’s numbers came out, “a gain of 118,000 would have resulted in an 8.1% rate but“, in the BLS numbers on Friday, “a gain of 114,000 resulted in a 7.8% rate? How do fewer jobs actually result in a lower unemployment rate?”

Ed Morrissey, the 2010 CPAC blogger of the year, looked deeper into these numbers and urged caution:

It doesn’t mean a conspiracy is in place; it does strongly suggest that this month’s sample of 60,000 households threw an outlier, especially when compared with the establishment survey and other economic data.  If so, it will likely correct itself in the next report.  That’s not “trutherism” or denial, but straightforward data analysis.

In another post, Morrissey also contrasts the New York Times’s coverage of the September 2012 jobs report to that in September 2004 and found that when a Republican was running for reelection, ” a jobless rate of 5.4% ‘cast doubt’ on the economy, and suddenly [this year] 7.8% is a sign of “a steadier recovery.”  In yet another post, he offers charts and data providing a real picture of the Obama economy.

This is the one chart that really shows just how much the Obama economic policies have failed: 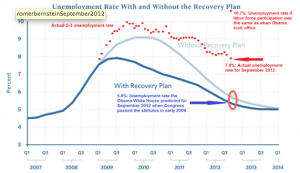 Here, the American Enterprise Institute’s James Pethokoukis updated “the January 2009 jobs forecast by Obama administration economists Jared Bernstein and Christina Romer [, taking] the super-optimistic chart they produced and add[ing] the actual, gloomy employment results.”  I added in the little circle showing where the Obama team anticipated unemployment would be with and without their recovery plan.

So, after spending $800 billion on that plan, unemployment is still about two points higher than those economists predicted it would be today had Congress not passed the plan.

Bear in mind that the the 7.8% top-line figure

. . . reflects the percentage of the total workforce who are unemployed and are actively looking for work. This figure does not include unemployed members of the workforce who are not actively looking for work; nor does it factor in workers with part-time jobs who are seeking full-time employment. When these workers are included, the (U-6) un/underemployment rate for September remained at 14.7% as it had been in August.

Democrats may revel that the BLS unemployment number shows a considerable decline over last month’s figure, but it hides a picture of an incredibly anemic recovery, particularly the real failure of Obama’s economic policies.

Even if the BLS economists are monkeying with the numbers (a claim about which I remain skeptical), we do see a workforce with millions of Americans underemployed.  It doesn’t seem the Democrats’ recovery plan did much to put Americans back to work.