Yesterday, Glenn Reynolds linked a post that I first read on my iPhone, then read again after I had returned to LA (when a reader e-mailed me the piece as it fit in nicely with a conversation we were having.

. . . is likely a result of Cillizza having his head inside the liberal media echo chamber where never was heard a discouraging word about Obama. Democrats were pumped up and eager for action after eight years of Bush, and having a completely untested candidate allowed them to project onto Obama whatever they wished to see there. If you bought into that hype (as Cillizza evidently did), then it was easy to imagine Obama the Light-Bringer riding to glory astride a flying unicorn, eating Magic Peace Flakes for breakfast and farting rainbows all day long.

Read the whole thing.  It is fascinating to see so many folks in the legacy media saying what conservatives have been saying at least since Obama started racking up victories in Democratic primaries and cauci in 2008.  Our reader Kurt shared with me this image that Dr. Sanity posted on February 14, 2008: 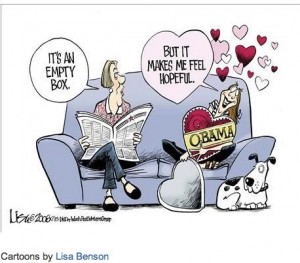