Most people forget that back in the 2008 campaign, there was a period where the Obama campaign seems lost and the candidate himself confused. Right after the Republican convention, with the GOP (briefly) energized by Sarah Palin’s selection, the Democrat was forced to play defense and the wheels, as Hugh Hewitt blogged at the time, seemed to be coming off the Obama campaign bus.

This week, we’ve been seeing a similar thing with even Obama-friendly institutions like AOL/Huffington Post taking notice: 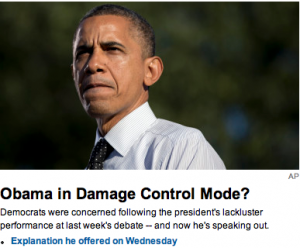 In an article I cited in my previous post, Noah Rothman observed that “President Barack Obama’s campaign has responded to the newfound adversity he faced after his debate loss with a stunning lack of competency.”

At Commentary, Jonathan Tobin wonders if Obama “and his campaign are temperamentally unsuited to playing from behind“.  The record of 2008 — and this past week — does not provide much evidence that they are.

Maybe the campaign has changed in the intervening four years, but we haven’t seen much evidence suggesting that Obama knows how to play defense.  Seems he’d rather “lead from behind” in foreign affairs than campaign from behind come election time.