Earlier today, while tidying my apartment, I came across this print-out for 2008. Soon thereafter, I scribbled in the upper right-hand corner a note, “Relate to Ed Morrissey”. 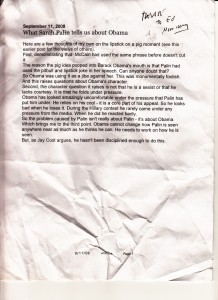 This links a piece reposted here and directing us here (link not working) for the original, with this passage about how the then-candidate behave when the chips are down:

Obama has looked amazingly uncomfortable under the pressure that Palin has put him under. He relies on his cool – it is a core part of his appeal. So he looks bad when he loses it. During the Hillary contest he rarely came under any pressure from the media. When he did he reacted badly.

What struck me about the print-out was how it reminded me (as per my scribbling) of Ed Morrissey’s thoughts about President Obama’s discussion of “Romnesia”:

Those elementary-school attacks using people’s names are something one usually farms out to surrogates (and is pretty lame regardless).  That comes with the grasping of “binders,” literally grasping in Joe Biden’s case (and literally literally, not Bidenesque “literally”), as a major campaign theme. When the President himself starts using attacks like this, it speaks to his desperation more than his opponent’s positions.  It adds more heft to the argument that the first debate wasn’t a fluke, but demonstrated an actual gap in presidential stature between the two men.

Already in 2008, we had evidence of Obama’s discomfort under pressure. He only seems cool when the going is good.

RELATED: “Let me give you a quote that he said just four years ago: ‘If you don’t have any fresh ideas, use stale tactics to scare people’…”