Surveying some recent polls, Commentary’s Jonathan S. Tobin found that “the Washington Post/ABC News poll published on Monday that showed President Obama with a three-point lead was . . . was based on a sample that had nine percent more Democrats than Republicans; a figure that is far more than is reasonable.”  It wasn’t the only poll to give Democrats a bigger margin than the 7-point turnout advantage they enjoyed in 2008; the “new Hartford Courant/University of Connecticut poll” had “Obama up by three but” with “a sample that has eight percent more Democrats than Republicans.”  And per the circled section in this chart from RealClearPolitics (screen capture on 10.20.12 @ 12:30 PST), neither poll shows the incumbent hitting 50%: 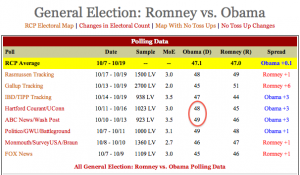 In other words, even with a sample more Democratic than the likely turnout next month, Obama still can’t hit 50%.  Indeed, the RealClearPolitics average hasn’t shown Obama exceeding 50% all year.

Now, while most polls have shown both candidates in the mid- to high 40s, Gallup has shown Romney drifting up all week and holding steady above 50%. Like his support, the president’s approval has been slipping this week as well.

Obviously, Republicans want to believe Gallup’s number, especially if what Karl Rove says is true about a candidate who exceeds 50% in its mid-October likely voter survey.  It is the oldest, established polling firm in the country — and considered the most reliable (note the passive construction here).

Even Romney is not up by as much as Gallup indicates, it does seem that the Republican candidate is ahead nationally — and is improving in the swing states. And I am beginning to wonder if Obama reached his peak back in September and that peak was just shy of 50%.  (To note, in 2012, the Democrat has never hit 50% in Gallup’s likely voter poll.)  This does suggest that if Obama can get his folks out to vote, he could still win this thing, though by the narrowest of margins.