Gloria Allred may well be the lawyer, as per TMZ, attempting to unseal the divorce records of “Staples co-founder Tom Stemberg and his first wife Maureen”, but the move has Barack Obama’s fingerprints all over it.  As Sarah Hoyt, blogging at Instapundit, reminds us unsealing private records is the Democrat’s signature move.

He did it twice in his 2004 race for the U.S. Senate seat from Illinois, first against his strongest primary opponent, Blair Hull, then against Republican nominee Jack Ryan.  Now, to be sure, it was the Chicago Tribune, not Mr. Obama (or his team) who filed suit to unseal the records, but it does seem interesting that, in both cases, the paper was looking into sealed information about that Democrat’s opponent.

Indeed, about the Hull matter, the New York Times did report that, “The Tribune reporter who wrote the original piece later acknowledged in print that the Obama camp had ‘worked aggressively behind the scenes’ to push the story.”   Do hope some people ask Miss Allred today whether or not David Axelrod had asked her to purse this matter.  And why she waited until just two weeks before the general election to do so.

Ace, who has looked at the details of the case in question, a divorce settlement from 1986, doesn’t “really see the Romney angle, except in extremely contrived fashion.”  (Read the whole to see why.)  Trying to figure out what Mr. Romney’s testimony in a 26-year-old divorce case have to do with his ability to govern the United States of America.

UPDATE:  Yup, his fingerprints are on it: 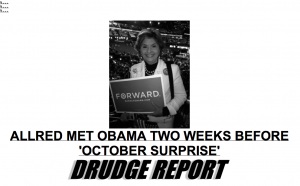 UP-UPDATE: Looks like Mitt’s testimony may have been from 1991.