One Facebook, a liberal friend shared this image purporting to showing how much debt the nation accumulated under the presidents since Reagan.  It seemed the purpose was to exonerate the incumbent while laying the blame at the feet of his predecessor for our nation’s $16.208 trillion debt. 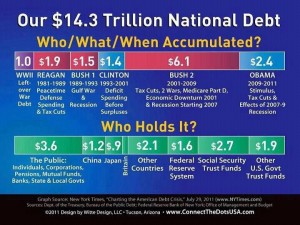 On January 20, 2009, the day the incumbent took office, the national debt stood at $10.627 trillion, meaning it increased approximately $5.581 trillion on this Democrat’s watch (less than a full term in office.)  By contrast, “[t]he Debt rose $4.899 trillion during the two terms of the Bush presidency.”

Now, to be sure, maybe Obama did indeed “inherit” a budget out of balance, but he had solid Democratic majorities in both houses of Congress during his first two years in office.  In his campaign, he had promised a “net spending cut” while he office as he had promised to cut the deficit in half in his first term.

He achieved neither of those goals.  He didn’t even come close.

On the current campaign trail, he is not putting forth any plan to reduce the deficit should he win reelection.

It seems that those who created the above chart seek to pass the blame for the nation’s debt onto Obama’s immediate predecessor, as if that will absolve the incumbent of not having a plan to control federal spending.