This headline from Yahoo! Finance says pretty much all you need to know about today’s job growth figures: Stronger Than Expected 3Q Growth Weak By Historical Standards. Obama and some liberals on Facebook (and on twitter, as I understand) are trying to spin this as a positive sign, but the first two paragraphs of the article (from a usually Obama-friendly source) should dispel any notion that this is great news:

The U.S. economy picked up some steam in the third quarter. The Commerce Department reported that GDP grew at a 2% annualized rate from July to September. That’s an improvement from the sluggish 1.3% pace in the second quarter but nothing to get excited about, says David Rosenberg, chief economist and strategist at Gluskin Sheff.

The higher growth in the third quarter was due to increased government spending, which is unsustainable, he tells The Daily Ticker. Factoring that out means growth was 1.3% in the private sector, virtually unchanged from the previous quarter, says Rosenberg. 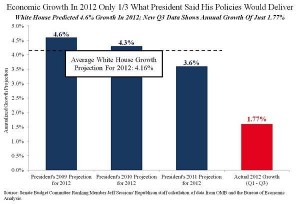 So, while Obama may boast that the economy is growing, the bigger issue is that it’s not growing as fast as the Democrat promised, particularly when he sold the nation on his $800-billion “stimulus.”

Growth, in short, “is less than half of what the White House projected growth would be this year” — providing further evidence that we can’t put too much stock in Obama’s economic forecasts — or his policies.