Yesterday, as we reported here, President Barack Obama whom HRC endorsed back in May 2011, long before the Republican primaries were even underway, “President Obama told MTV viewers that when it comes to same-sex marriage, it would be up to future generations of Americans to implement meaningful reform.”

This morning, I checked HRC’s web-site to see what the gay rights’ outfit had to say about Mr. Obama’s statement.  I could find nothing in their press releases.  A search on their home page for “obama mtv marriage” (without quotation marks) yielded nothing.

I also wondered what they had to say about the brutal beating of gay Republican, Kyle Wood.  Wood, as you recall, had been beaten after his car had been vandalized with mean-spirited insults, including the word, “faggot.”

Here are the results of my search: 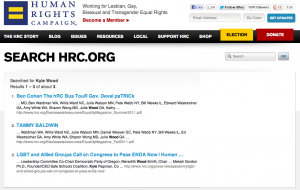 HRC, Two Days of Silence on this assault, Will You Speak Up?NB:  Tweaked title.