Yesterday, Bruce offered both the details of the attack on our consulate in Benghazi and a list of questions the White House refused to answer, questions, it appears, journalists for the “three major TV new networks” are failing to ask.

Summarizing the three elements of the scandal, John Hinderaker finds it

. . . hard to imagine how any newspaper could ignore, or even try to downplay, a story of this magnitude. Yet, if you rely on the New York Times for information, you know little about the battle of Benghazi, and nothing at all about the explosive account that emerged on Friday, fueled in part by the anger of the father of one of the dead American operatives.

John notes that the so-called paper of record “trying to ignore the charge that the Obama administration rejected calls for help from embattled troops on the ground in Benghazi” and asks if “the Times [is] always so reluctant to cover a foreign policy scandal in the last days of a presidential campaign”.  Read the whole thing.

Given this does seem a perfect image of the White House press corps: 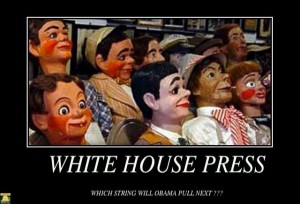