In the past few days, whenever I have checked HRC’s web-site, this one image struck me: 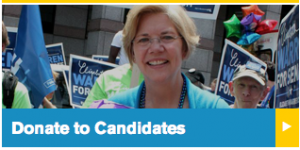 Of all the candidates they endorsed, they chose to feature Elizabeth Warren. You would think that a gay organization wishing to influence Congress might not want to highlight its support of a candidate running against one of the few Republicans who voted to repeal Don’t Ask/Don’t Tell.

Should Scott Brown win election, how likely is this man, open to bucking his party on issues of concern to HRC, to be receptive to their lobbying?

It seems HRC if featuring Ms. Warren because hers is a marquee race for the left. And outfit is once again committed to proving its left-wing bona fides.

It’s too bad.  If HRC had the courage to back Mr. Brown, they would show that Republicans could benefit by voting the right way on gay issues.  Maybe this helps explain why so few Republicans voted to repeal DADT; they knew that it wouldn’t increase their standing with gay groups.

Scott Brown did vote the right way on Don’t Ask/Don’t Tell.  We should support him.  Let’s show Senator Brown that some gay Americans do appreciate his leadership in the Senate; join me in contributing to his campaign.