I am always struck when Yahoo!, on its home page, links a story beneficial to Mitt Romney, this time offering a data point similar to observations made by prominent pundits: 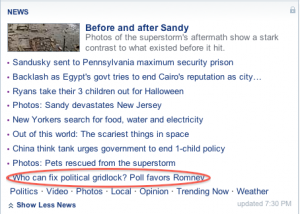 a vote for Obama is a vote for more gridlock — seems to be getting through. An Associated Press-GfK poll shows that almost half of likely voters — some 47 percent — think the Republican challenger would be better at ending the logjam Thirty-seven percent say Obama would.

37%? That’s far fewer than the percentage supporting the president.  It seems even a good chunk of Obama’s supporters know that lacks the skills he, in his last campaign, claimed to possess.

Not just that, a poll which favors Democrats by five points finds that 54% of Americans think Romney has the “right experience to create more private sector jobs“.  Just 41% prefer Obama on that account, five points fewer than his tally in that survey.

UPDATE:  Commenting on the same poll, Paul Mirengoff believes the number makes sense, “Romney has pushed hard on the theme that he can work with Democrats. Obama, meanwhile, has spent four years proving that he can’t work with Republicans.”  He also reports the poll’s top-line number (not included in the AP report):  Romney leads Obama by 47-45.  Interesting that Yahoo! didn’t include that number in its report.