Have you seen any stories in the mainstream media about how enormously popular Ann Romney is? Do the TV networks report about how she’s always mobbed by autograph-seekers after her speeches? And if not, why not?

All good questions not just because of Mrs. Romney’s poise, but also because the woman born as Ann Davies obviously had a profound impact on the life of her husband.

He has overcome numerous hurdles during long slog of this campaign, faced tough question from a hostile media and has been the target of perhaps the most expensive TV attack ad campaign in the history of American politics and still managed to come across as a calm and collected leader in three debates and on the campaign trail. 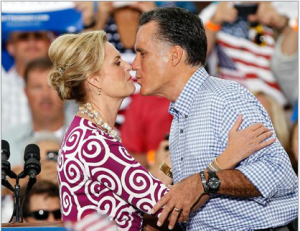 And perhaps, Mitt Romney’s strong — and long-lasting — marriage to his high school sweetheart helps account for his ability to persevere.  As I wrote just a few weeks ago, he likely “wouldn’t have turned out as well as he did without” Ann’s influence.

Before he seriously started wooing Ann, Mitt Romney was an unruly adolescent.  Almost from the outset of their courtship, he became a more focused adult, committed to building a business and concerned about those in his community.

Ann has helped Mitt become a better person.  And let’s hope she is able to help him become a great president.