This is our official GayPatriot Election Night Electoral Map. 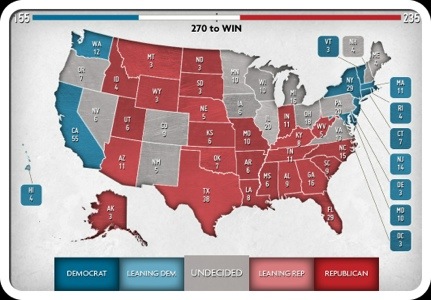 This is not our “prediction” map. This is our Decision Desk map projections based on polls, historical trends and — importantly — actual votes.

All of the other states that have been colored have been projected due to the overwhelming likelihood those states will go traditionally as in the past.

The gray states are toss-ups and will most likely remain that way until polls close on Tuesday. Unless I see some important actual early voting stats in a certain state.

Finally, yeah I’m going out on a limb with NC & FL. If the actual voting patterns on Tuesday warrant it, we will certainly pull a state back and/or switch our projection altogether.