It took me about 20 minutes to vote at my polling place.  The lines weren’t particularly long.  Four precincts voted in the same location and mine was the only one with a line.  When I arrived, one precinct had only one voter:

We had to check in three times, but they never once asked for ID, first at the front door where they directed us to the appropriately colored table, then once at that table, first by our last name, then by street address. It struck me that the man who lived in my apartment before I moved in was still on the books. He moved out in June 1999.

This is the shot of the whole gym where I voted: 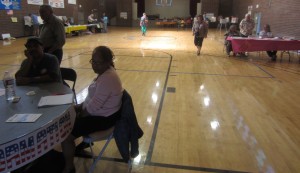