Looking at the recently released Congressional Budget Office tally on the FY 2012 budget, the editors of the Wall Street Journal find the feds the feds rolling up

. . . another $1.1 trillion deficit for the year that ended September 30, which was the biggest deficit since World War II, except for each of the previous three years. President Obama can now proudly claim the four largest deficits in modern history. As a share of GDP, the deficit fell to 7% last year, which was still above any single year of the Reagan Presidency, or any other year since Truman worked in the Oval Office. 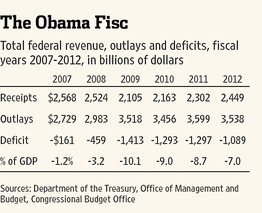 As point of reference, the federal budget deficit for the preceding fiscal year, 2006, was $248 billion.  In other words, while the divided Congress of then-President Bush’s first two years in office  ramped up spending, the more Republican 109th Congress exercised greater fiscal discipline.

Only with the election of a Democratic Congress in 2006, responsible for passing the FY 2008 budget, did spending start to increase and deficits burgeon.  As the chart shows, we wouldn’t see any decline in the deficit until FY 2012, the first year in which a Republican chamber of Congress had a hand since FY 2007.

FROM THE COMMENTS:  ILoveCapitalism says it’s

Worth repeating that FY2009 belongs to Obama because His signature is on it, not Bush’s. The Democrat Congress held it back from Bush’s signature, so that Obama could increase the spending, when He took office in early 2009.