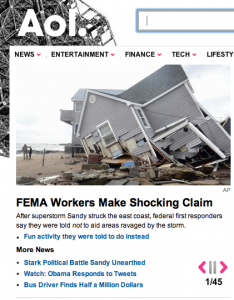 That image/headline even linked an article on FoxNews: EXCLUSIVE: FEMA teams told to ‘sightsee’ as Sandy victims suffered.

Here’s more news of FEMA’s incompetence, much of which is coming to light only after the election. Angry New Yorkers say Obama pledge to cut red tape ignored by FEMA.

FROM THE COMMENTS:  David wonders at the ability of the media to craft a narrative about natural disasters:

It’s more than a little bit scary when you recognize the ability of the MSM to influence the perceptions of Americans as to the truth of what is going on. Before Katrina hit Navy and Coast Guard ships positioned off the coast, MREs and water were stockpiled in the Superdome, FEMA positioned medical teams and specialized personnel outside New Orleans, and aircraft were positioned to assess damage and carry out rescues. After the storm hit the responders carried out the largest post-war air rescue ever. A constant stream of helicopters ferried survivors out of flooded areas to safety. And yet the meme that Katrina was a failure of leadership saturated the news and talk shows for months. It was a politically motivated false narrative then just like the Sandy narrative now.

If Obama has been president in 2005, then we might certainly have learned of all the preparatory work that FEMA, the National Guard and the Coast Guard had done.