Last night before bed, caught these as the leading headlines on Yahoo! 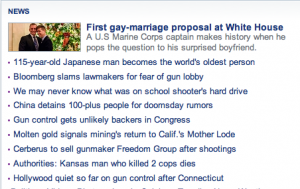 Of the top headlines, five are related to the Connecticut shooting, only one could be considered news about the horror. The rest related to political jockeying over guns.

Instead of focusing on what happened, our friends in the legacy media have become obsessed over guns.

Yesterday, Glenn Reynolds shared an exchange he caught on Facebook:

“What is the gun community going to do about this tragedy?”

“I dunno. What is the gay community going to do about Penn State?”

“Ouch”, added the blogmeiser, “But a fair response to unfair stigmatization. With the gay community, everyone would complain about smearing millions for the deviant and predatory behavior of a few.”

And such a response would be correct.  The pederast at Penn State was as representative of gay people as the shooter in Connecticut was of gun owners.