We gay men, like our straight counterparts,appreciate seeing images of ourselves in literature and film that correspond to a more idealized version of ourselves, not necessarily perfectly idealized, to be sure, but at least characters who have a (somewhat) noble demeanor and show a bit of derring-do — and maybe manifest a few of our flaws.  All too often alas, in literary fiction, we see too many gay men depicted as whiners, victims of an unfair society or, in mainstream and science fiction, as lonely people who live apart from their peers, rarely connecting with others and never succeeding in romance.

In Sarah Hoyt’s A Few Good Men, a science fiction novel set in a dystopian future on earth, , however,we have a gay hero who very much has that derring-do and even has a few of flaws common to most mortals, a man who suffers the loss of one lover, but finds in another both the companionship that we all crave and the encouragement that we all need.

You won’t be able to buy a hard copy until March 5, but buy and download an e-book today or pre-order a copy on Amazon.  The e-book may, I understand, still have a few typographical errors.  So, if you want to read the perfectly proofed version, you’ll have to wait a few months. 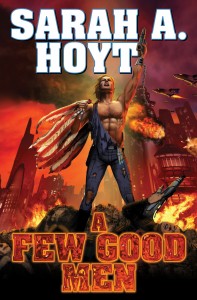 The book is a fast and a fun read. After receiving an advance copy electronically, I printed out various pages and read them as I did my cardio. So engaged was I in the book that I often found myself working out longer than I had intended.

The story moves quickly along from the outset when our hero, Lucius Dante Maximilian Keeva, or Luce, escapes from the secret prison, Never-Never at the bottom of the ocean. He was born to the aristocracy, the son of “Good Man”, each of whom runs a seacity, little fiefdoms built in the midst of the Atlantic.

Before his escape, he had tried to take his life and wondered why the wardens worked so hard to keep him alive. Given the tensions with his father, he thought the old man would be content just to see him die.

He talks constantly with Ben, whose older brother Samuel manages the family estate. Theirs is no ordinary form of communication. They had been lovers until Luce killed him to spare him the pain of further torture.  His late lover’s voice will guide him even after his escape.

Once a free man, Luce learns that both his father and brother have been killed, yet when he returns home to claim his own, he finds that things aren’t exactly as he imagined they would be when he wielded power.

As a Good Man himself, he starts to wonder how his late brother, when he briefly served as Good Man, came to act more like their father, even in his choice of bedroom decor and at the interest Samuel’s oldest son, Nathaniel takes in him.

This interest grows into much more than a friendship.  Soon Luce joins us with a secret sect to which his late lover and current “squeeze” belong.  Until Nat started teaching him about Usaians, Luce thought they were just part of a “religious sect” with “roots in a mythologizing of the old country that used to occupy much of the North American territories.”

In short, they want to restore the republic. Luce soon learns that many of his household staff had joined the movement and were named for the Founders, his first lover in honor of Benjamin Franklin, his second for the under-appreciated Revolutionary War general Nathaniel Greene.

A Few Good Men is thus the perfect book for gay patriots, a story about two men who fall in love while joining a rebellion that honors the Founders of our republic.  Not just that, it’s a fun-faced read, perfect to download to your kindle or iPad to entertain you while you work out.

The book’s strength is not just its patriotic themes, but that it tells the story of a gay man who is willing to risk his life for his beloved and his beliefs.  These gay men are portrayed not as whiny weaklings bemoaning their fact, but as confident leaders, willing to take charge of their destiny.  And Hoyt’s gay protagonist, instead of being a victim, becomes a hero, finding both a man to love and a cause to reverence.

A Few Good Men is a book to savor — and to celebrate.