Just caught this on ad on the sidebar of a Weekly Standard article: 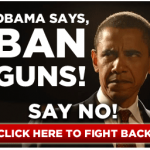 And it called to mind something Glenn Reynolds had posted yesterday, a reader e-mail reporting increased business at gun stores in Alabama. “There’s no question“, said correspondent observed

that America is better armed than it was two months ago, all thanks to President Obama! Assuming the Republicans in the House don’t prove spineless (a major assumption), the net effect of the Obama gun control initiatives will be to a massive increase in guns owned by private citizens, record profits for gun stores and manufacturers, and a very alert citizenry. This second term may yet work out better than expected!

Instead of decreasing the number of firearms, including “assault” rifles owned by citizens, Democratic rhetoric has served to increase that number.  Seems that politicians’ rhetoric is like government action:  the results are quite from those intended.