I first became aware of Daniel Hannan, a British Conservative Member of the European Parliament (MEP), in the spring of 2009 after the video of his speech attacking Gordon Brown went viral.  Over the past few years, he has continued to garner attention here, “across the pond,” for other speeches, and he has been a repeat guest on conservative talk radio and Fox News.

This past weekend, Anne Sorock at Legal Insurrection linked to his recent take down of the Occupy Movement from an appearance at the Oxford Union. 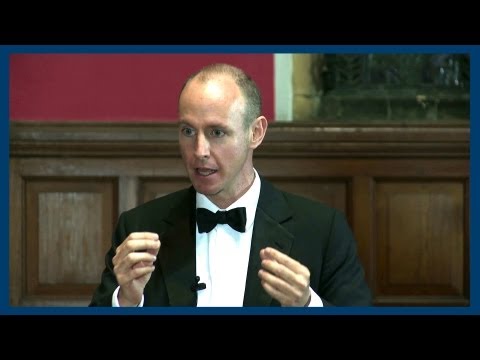 It is an impressive performance.  Hannan not only delivers a ringing endorsement of capitalism and an indictment of the bailouts, but he also explains the links between what the Occupy crowd says it wants and today’s economic woes, and he does so with a force and a clarity that is thrilling to witness.

Watching it, I was struck by how much Hannan reminded me of some of the clips I’ve seen of Margaret Thatcher’s appearances before the House of Commons during her time as Prime Minister, particularly this one from her last appearance.  I had to wonder if Hannan’s career might in time resemble Thatcher’s and if some day he will be the Prime Minister of Great Britain.

At the same time, though, I have to wonder: who are the Hannans here in the U.S.?   When Romney selected Paul Ryan as his running mate, I had hopes that he would provide such clear-spoken explanations of conservative economics on the campaign trail.  While it’s quite possible he did and the press did its best to muzzle them, I suspect that, in actuality, they were few and far between, as the Romney campaign seems to have been reluctant to hit the Obama administration too hard.  In the past few weeks, many conservatives have been talking about recent statements made by Senator Marco Rubio, Senator Rand Paul, and even the newly-minted Senator Ted Cruz from Texas.  So are any of these men likely to be our Hannans?  If not, then who might be?