If you don’t want to listen to the entire show (see post below), I’ll cut to the chase — I have decided not to run for United States Senate in 2014.

I mostly spoke about my life and background as well as the process of due diligence that I undertook to see what it would take to run a campaign.  The support I received from the conservative grassroots was nothing short of amazing.  I will never forget the organic excitement that my musing created.  God works in mysterious ways, folks.  I’ve seen it.

The bottom line is that my partner John and I made a mutual decision that we didn’t want our entire lives invaded in a way that we couldn’t control.  On the show tonight, I discuss the fact that a gay leftist activist harassed me at my place of private employment in 2005 shortly after this blog was born.  My job was in jeopardy for a while then and other people at my company of employment were threatened.

The magnitude of those type of attacks would only have increased exponentially had I chosen to move into a role seeking public office.  The Gay Left concerns me the most; I’ve witnessed good people’s lives and families destroyed over public policy differences. They are beyond the pale.

However, my team had planned to run a guerilla-style campaign that would have upset others as well — those who have made a career and money in politics in South Carolina.  I wanted to run as a “citizen-legislator” but the system is not made for that anymore.

Finally, the week after CPAC, I noticed this unmarked van casing our house for over two hours.  We tried to confront them, but they drove away. I have no idea who it was or what their intent was, but it got me thinking more seriously. 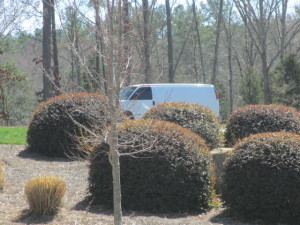 When all is said and done, all I have in my life is my privacy, integrity, family and property.  I am just not strong enough of a person to put all that on the line for a high-risk gamble against a sitting United States Senator.

I hold out hope that someone else in my state is braver than I am.