Does the left-wing Facebook group which posted this picture realize how accurately it depicts the juvenile attitude the incumbent President of the United States has adopted to his predecessor: 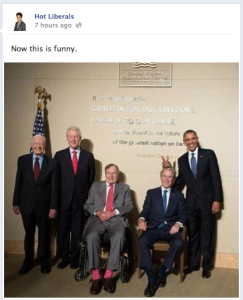 And how the depiction does their man no credit.  They may find this funny, but the action they depict reflects poorly on their man in Washington as Jennifer Rubin explains:

There is irony overload in President Obama describing President George W. Bush as “gracious” and “patriotic.” Obama has been among the most ungracious of successors, rising to power by vilifying Bush 43 and blaming four years of economic failure on his predecessor. He has assiduously refused to acknowledge Bush’s accomplishments (e.g. the troop surge). Dubbing his predecessor as “patriotic” is only a compliment in a political universe in which “Bush lied, people died” is taken as gospel. (Does he imagine there is some doubt as to Bush’s patriotism that requires Obama’s stamp of approval?)

(Read the whole thing.)  How many other presidents whined about the problems they “inherited” from their predecessor?

No, Mr. Obama never performed the juvenile stunt depicted in this photoshop.  But it does say a lot about liberals who think it funny.