It’s been nearly eleven months since Dan Savage slurred certain gay people (with whom he disagreed on matters political) as “faggots,” an epithet whose use by one teenage girl caused the Human Rights Campaign to demand an apology from that girl’s Republican mother.  Well now Mr. Savage has wished illness upon that charismatic Republican woman.

And yet I could find nothing on HRC’s web-site related to the slur.* (HRC has still refused to call on Mr. Savage to apologize for using a hateful word to describe his fellow gays.)

Mr. Savage wished cancer on Sarah Palin.  I guess it’s okay to wish death on those horrible, no good very bad Republicans.  Don’t expect any gay group to ask that gay leftist — or any gay activist — to speak in more civil terms. 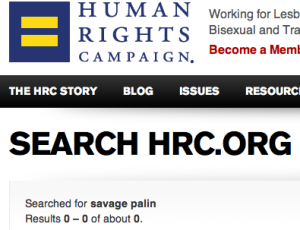