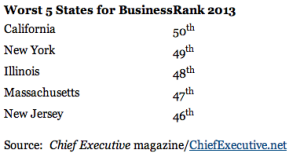 H/t: Washington Examiner which alerted me to the study in reporting that the top 10 states for business all led by Republican governors.