She didn’t make any reference to calls she made at 2 AM.  Gregory Hicks, Deputy Chief of Mission at the U.S. Embassy in Libya, “testified that Clinton had called him at 2 a.m., while the attacks were underway.”

At 2 AM she had learned that terrorists had attacked our mission in Benghazi.  Still, she peddled the notion that a video was to blame despite evidence that said video “was a non-event in Libya.”

Wonder if this story will get as much coverage today as the verdict in some trial in Arizona. 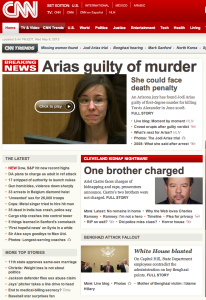 Note where the place the only issue of true national interest.

AOL gives more billing to a “half-cat” than to Benghazi: