On Tuesday, Jeff posted a video with clips of the current President of the United States Barack Obama using almost identical language to that of Richard Nixon to describe how each learned about scandals taking place under his watch, with both politicians claiming they had learned about them from news reports.

Today, while tidying my desk, I came across a note I had scribbled over four months ago:

They’ve even got Bob Dole repeating that Democratic talking point (without providing any evidence to back it up).

If the Democrats continue to stonewall on the various scandals percolating around this administration, the media will have a tougher and tougher time making the age-old Nixon comparisons stick to the GOP.

NB:  I had scribbled the note on January 9, 2013, the one hundredth anniversary of Nixon’s birth.

UPDATE: Meant to include this screen capture from the Obama-friendly AOL: 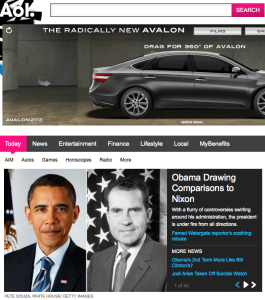