Toward the end of my workout tonight, I caught CNN trumpeting its “exclusive” interview with one of New York Democrat Anthony Weiner’s “sexting” partners.  They even featured the story on their website: 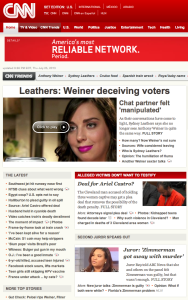 Do wonder if the network ever interviewed leaders of Tea Party groups targetted by the IRS? And featured them so prominently.

(FYI, I don’t know the answer to the above question, but, in all the hours that I have spent watching CNN while it plays of the TV monitors at my gym, can’t recall seeing a single such interview.)