Surprised that the left-leaning Huffington Post chose a picture wherein their man look like a petulant child. 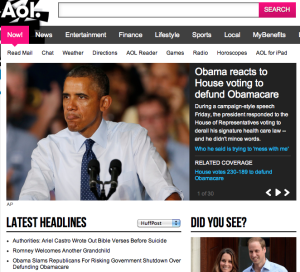 Given all that we heard (in the 2008 campaign) about Mr. Obama’s temperament and his ability to bridge the partisan divide, shouldn’t he know be putting those skills to use in keeping the government open instead of lashing out at the House majority supporting a bill consistent with the views of its constituents?