Here is a graph I created at the St. Louis Fed website, showing medical inflation since 1947: 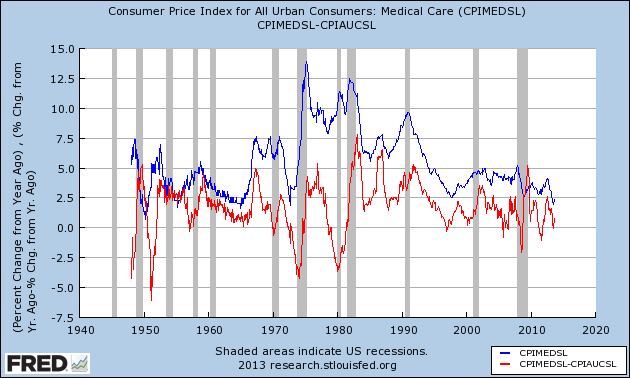 Why bring this up? Dan’s post on his debates with people over medical costs says, “Some have noted that insurance costs were escalating even before a Democratic Congress passed Obamacare…”

And that is true: Medical costs (a large component of medical insurance costs) have been escalating for decades, because the government has been messing with the medical system for decades – causing increases to inefficiency, cost and price. For example, Medicare was created in 1965 and took into the mid-1990s to grow into the monster entitlement that we know today; note the large (if volatile) excesses in medical inflation, in that period.

Obamacare, because it is even more of the same, cannot help matters in the long run; not even if Obamacare achieves some specific or short-term cost reductions (which is highly debatable).

Remember Einstein’s definition of insanity: doing the same thing over and over, expecting a different result. Rather than continuing to boost the level of government intervention in health care, we should be looking to reduce/reverse it.

Hat tip to Kevin Drum at Mother Jones for the idea behind the chart. (But not that his article is very good; as a committed statist, he naturally draws the wrong conclusions from the data staring at him.)