This is the language of a politician on the campaign trail, not of a president trying to do his job.

UPDATE:  Even Yahoo! notes the president’s confrontational tone while its editors link an article with a headline ascribing that tone to Republicans: 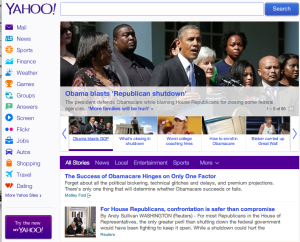 Seems the Reuters writer is writing from the Democratic playbook, portraying the Republicans as confrontational while downplaying Democratic name-calling and refusals to negotiate.