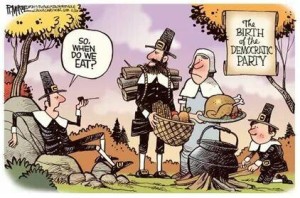 Next week is Thanksgiving, which means we will be subjected to the tiresome, childish ritual of the most powerful man in the world “pardoning,” Thanksgiving turkeys.

Wouldn’t it be awesome if a president just ended this silliness and said, “This is ridiculous. 40 million turkeys are going to be eaten on Thursday, what’s so special about these two. I’m eatin’ them. And if anybody has a problem with it, grow the hell up.”

The silly turkey-pardoning ritual is just one manifestation of how infantilized our culture has become.  Have you noticed how many TV shows and movies of late have been based on Children’s Books? Harry Potter, Grimm,  Sleepy Hollow, Once Upon a Time, Snow White and the Huntsman, Wicked, Red Rding Hood, Hansel and Gretel: Witch Hunters, Jack the Giant Slayer, and a whole bunch of others.

There’s a time and a place for fantasy and children’s literature, just as there’s a time and a place for comfort foods like peanut butter and jelly sammitches. But you begin to wonder if the prevalence of children’s literature in the mainstream of entertainment and the performance of childish rituals at the highest levels of Government are symptoms of a culture that is no longer grown up enough to face reality and deal with its very serious problems in an adult, responsible way.

Instead, politicians are elected because they promise that Government will be the parent who takes care of everything, and paints anyone who says that isn’t a good idea as a big meanie who hates you. (“Mitt Romney will outlaw tampons!” “Ken Cuccinelli will outlaw birth control and teh buttsecks!”) These tactics would not prevail in a country where the majority of the electorate were mature, rational, adults.