The Republican Party was actually having a pretty good couple of weeks. Obamacare was imploding. The generic ballot flopped in favor of Republicans. 2014 was beginning to look like 2010, and maybe… just maybe… control of the senate was tantatlizingly within their grasp.

And then it’s like the Party Leadership got together and said, “O.K., How can we screw this up?”

The next day, John Boehner hired John “Landslide” McCain’s chief advisor on (illegal) immigration to help him push Amnesty through the House. 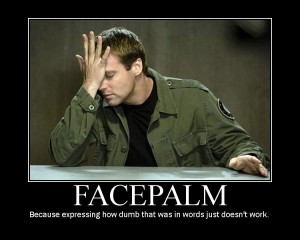 Is there anyone left who doesn’t hate the Republican Party? Is the Leadership of the GOP really stupid enough to believe that Amnesty will help them win elections? Do they really think Chuck Schumer and Dick Durbin are pushing Amnesty because they think it will help make Republicans more competitive.

If Mitt Romney had gotten 60% of the Hispanic vote in 2012, he’d still be known as the out-of-touch rich guy who lost to Barack Obama because idiot voters thought he wanted to outlaw tampons. (Also because Obama and the Democrats were promising more free stuff from the Government, which is sugar to Hispanic voters.)

But four more percentage points among white voters … especially, the working class “Reagan Democrats” whose wages have been devastated by the influx of cheap illegal labor …. and he would be known as “President Romney.”

And he probably would be pushing for some kind of Amnesty right now.

Update: Harry Harry Reid says Boehner will cave on Amnesty. He is probably correct. (Also, the Hill seems to have found a reporter even less butch than Chris Hayes.)