Imagine if you will, George W. Bush, attending a state funeral for a much respected world leader. And, during the funeral procession, he flirts with an attractive blond and takes grinning selfies in full view of the cameras. 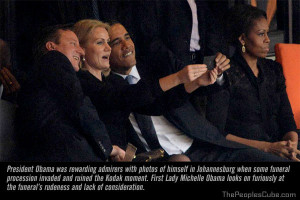 And before any of Obama’s Army of Sycophants shrieks “faux outrage,” I’m not actually outraged by him acting like a complete boob at a state funeral. I am somewhat outraged by his eager and ready handshake for a Communist dictator with the blood of thousands on his hands, who keeps millions of his people oppressed and impoverished. Or, maybe that’s not a big deal to the Food Stamp, IRS-Abusing, “I’m really good at killing people” President.