An Arizona couple was charged with assault and disorderly conduct after arguing with McDonald’s employees and throwing food at them, KNXV reports.

Michael and Nova Smith ordered a Number 2 and Number 4, but were outraged when they did not receive hash browns with their meal. 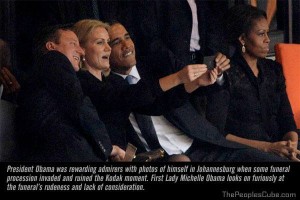 And this spokesman for his generation and low-information voters everywhere said this.

“Sometimes people write novels and they just be so wordy and so self-absorbed. I am not a fan of books.” ― Kanye West

And I can’t help thinking these events are related; linked by a common diminishment and rejection of standards of behavior across society. The people at the top of the political elite behave like street trash, and that lowers the bar for everybody else.

My mother passed away early this fall. My family is mostly made up of working/middle class folk who live in “flyover country.” We are the kind of people Obama and the rest of the ruling class look down their noses at, and dismiss as people who “get bitter, they cling to guns or religion or antipathy to people who aren’t like them.”

But I will tell you this. Even those parts of my family that make ‘Duck Dynasty’ look like ‘Frasier’ had enough decorum and decency not to take selfies at my mother’s Memorial service.

But that level of respect and decency is apparently too much to ask from the Leader of the Free World. So we shouldn’t be surprised when his subjects throw tantrums at McDonald’s and denounce reading books as a waste of time.