So, there’s this nontroversy being ginned up because Megyn Kelly of FoxNews — responding to a click-bait article on Slate that claimed the Caucasian-ness of Santa Claus hurt black people’s feelers — made the offensive, shocking, outrageous observation that … um… Santa Claus is a fictional literary character who has usually been depicted as white.

I know, try to restrain your outrage. You might hurt yourself.

The left got very, very upset about this. And you know it was a serious news story because Jon Stewart got all fake-angry about it and made funny faces. Also, CNN.

Anyway, why is this news? I have several theories why the left chose this story to be the “Thing everybody is supposed to be crazy-mad about this week.”

a. The left needed to change the subject from the SCOAMF’s boorish, juvenile antics at the Mandela funeral and plummeting poll numbers and his claims about Obamacare winning “Lie of the year.”

b. FoxNews is creaming CNN (and Comedy Central) in the ratings, and this is the left’s way of lashing out.

c. To people who don’t have a freakin’ clue how fiscally boned the USA is, this really is a very important news story, along with that Disney twink who posted nudies and something-something Beyonce.

d. All of the above.

What difference does it make, at this point, anyway? Everybody knows Santa Claus is actually gay. 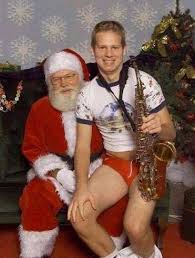