So, Mitch McConnell and John Boehner (and Paul Ryan) have declared War on the Tea Party because they say that people concerned about Big Government represent a crazy, ‘whackobird’ fringe and supporting fiscal restraint and limited Government will lead to electoral oblivion because Big Government is, like, uber-popular (the New York Times says so and Rachel Maddow agrees) and what Americans really want is $63Billion in new spending, a replacement for Obamacare that still puts the Government in charge of health care, more NSA surveillance, and Amnesty.

According to Gallup, however, the ‘Whackobird’ fringe is now 72% of the population. i.e. 72% of Americans say Big Government is the biggest threat the USA faces. 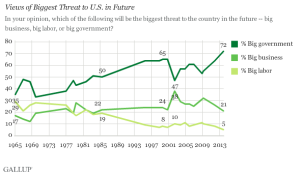 And yet John Boehner, after his victory in blowing up the Sequester, has now turned his sights on Amnesty. Because that’s what Big Business wants. By the way, Big Business, who the Republicans are jumping into bed with, was ranked as the Biggest Threat by 21% of Americans. The GOP establishment is going against 93% of the public.