There was a deranged conspiracy theory, embraced by some GP Trolls, that the Bush administration was building concentration camps for gays in the Pacific Northwest. That turned out to be about as truthful as “If you like your plan, you can keep your plan.” But there was Bush-Era official who was plotting something nearly as evil.

A high-level government lawyer who served in the George W. Bush administration tried to transfer gay employees and other workers he didn’t like to Detroit, according to a final report stemming from a years-long federal investigation.

(Scott Bloch, former head of the federal government’s Office of Special Counsel) stated that his plan was to create a new OSC field office in Detroit and to staff it with the homosexual employees, along with others who he (Bloch) viewed as exerting a negative influence on the office.

One should note that these are accusations made by former OSC employees. (i.e. left-wing political hacks).

Detroit has, of course, been run exclusively by left-wing socialist democrats for over forty years, and has of course become a squalid heckhole under their implementation of progressive policies. 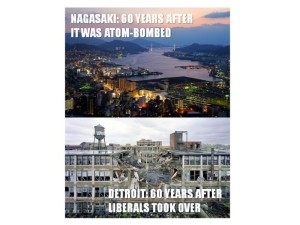