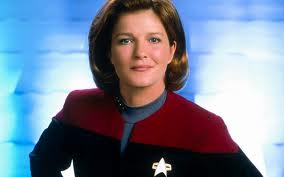 Who knew? Kate Mulgrew has otherwise been a flaming liberal. I may have to re-evaluate my mostly hostile opinion of Star Trek Voyager.

55,000,000 babies killed (women and minorities hardest hit) since Justice Hary Blackmun ruled in Roe v. Wade that abortion was unlimited in the first trimester… since expanded upon to “anytime, anywhere, for any reason a woman feels like it. (or as the left Orwellizes it, ‘safe, legal, and rare’). ” That’s a staggering number of human lives sacrificed in the name of unlimited, consequence-free sexual license. No one with a soul and functioning moral compass can contemplate that staggering amount of lives denied and not feel that something is deeply and terribly wrong.

Then again, leftists look at that number and think, “Not Enough.”