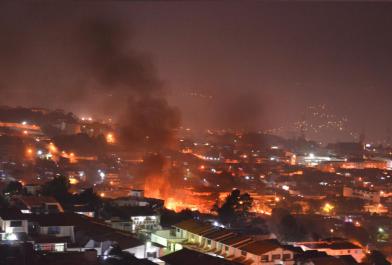 The MFM have been covering the unrest in Ukraine pretty well, but pretty much ignoring the similar violence going on much closer to home in Venezuela.

Throughout last night, panicked people told their stories of state-sponsored paramilitaries on motorcycles roaming middle class neighborhoods, shooting at people and  storming into apartment buildings, shooting at anyone who seemed like he might be protesting.

People continue to be arrested merely for protesting, and a long established local Human Rights NGO makes an urgent plea for an investigation into widespread reports of torture of detainees. There are now dozens of serious human right abuses: National Guardsmen shooting tear gas canisters directly into residential buildings. We have videos of soldiers shooting civilians on the street.

Of course, Venezuela is “problematic” for the MFM because they cheered when the Communist Regime came to power and were rooting for it to succeed. Hugo Chavez wasn’t much different than their hero, Barack Obama, because he was going to address income inequality and lead his country to a bright social-democratic future. Sean Penn, Harry Belafonte and other celebrities traveled to Caracas to do their best Walter Duranty on Chavez’s regime. When Chavez shut down the opposition press, the left cheered and wished Obama could do the same to FoxNews and Rush Limbaugh. Democrat politicians adored Chavez. The MFM mourned him when he passed, and ignored his legacy of power-grabbing, shutting down opposition, and leaving his oil-rich country with rampant power outages and shortages of basic commodities.

The end result of these regimes is always the same… deprivation, oppression, violence, and death. And yet humans always insist on giving it another go.

It’s easy for them to cover the violence in the Ukraine; they weren’t rooting for the Ukrainian Government to succeed and show that communism can work if there’s enough money and “the right people” are in charge of it.